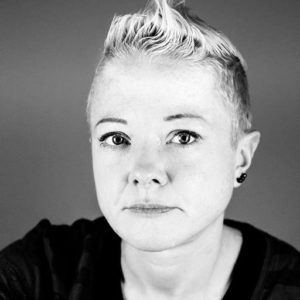 Naomi moved to Nelson from the UK in 2005. After meeting various people in the film and theatre groups in Nelson she has been involved in local projects such as Brawl in Bakersfield where she played the bazooka toting ‘Kallen’. Having done both film and theatre, she is looking to find more film roles to develop further. She enjoys the challenge of new roles, and takes direction well. “My job is to get the writers and directors vision out there, so I do what they tell me!”.

Naomi has enjoyed time on stage as a stand up comedian including supporting Cori Gonzalez-Mercuer and Guy Williams, winning some local competitions and placing in the Raw Comedy Quest and The Flick Comedy Gala. Previously to this in New Zealand her spare time was taken up with playing roller derby with the local team and MC’ing local games.

Naomi also enjoys writing. Her first film, Gone, was shown in the Top of the South Film Festival Gold reel in 2018. The 2019 Film Festival she acted and worked in 3 of the Gold reel films – Julie, Full Circle, and Stages, and worked behind the scene on others in the Silver Reel. In the delayed 2020 Film Festival her next two written pieces, The Cure, and Amity, have been accepted into the Silver reel. Alongside those, she has acted in and worked on an additional 6 films that are being shown at the Festival.