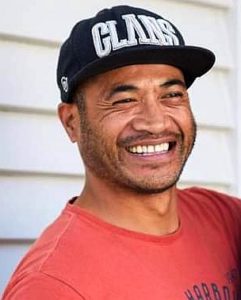 Ian and his family relocated to sunny Nelson at the end of March 2019.  He works as semi-professional freelancer.  Since arriving, he’s been making new  connections within the film society and wider community.

As a theatre practitioner and film maker, his particular focus is on strengthening Pasifika voices in the arts.

Ian studied at Whitireia Community Polytechnic attaining a Diploma, Degree and a Post-Graduate Diploma in stage and screen arts.  In 2016, Ian graduated with a Masters of Theatre Arts (MTA) in Directing, co-delivered by Aotearoa’s prestigious drama school Toi Whakaari: New Zealand Drama School and Victoria University of Wellington.  He is the only Samoan in Aotearoa with this degree.